Other Reasons Why Menzgold Collapsed…

Tagged the Cryptocurreny that has the audacity to rival almighty Bitcoin, the growth rate of Ethereum has been astonishing, with a lot of cryptocurrency investors profiting from its quick rise in market value.
Since its fast growth from around $80 to over $400 in just about a month, the value of Ethereum lingered around over $300.
The volatility of Ethereum was very high; kept dropping and picking up daily, while still maintaining the at least $300 market value.

Few days ago, the Cryptocurrency market witnessed a sharp decline of about $4 billion in the market value of Ethereum!
As the value began to drop, my assumption was that it was just a market correction, post its swift spike.
To my utter amazement Ethereum dropped further and lost about $4 billion in its market cap.
This took a lot of Ethereum investors by surprise; investors surely lost a lot of money.
A day after, it was reported that a fake news regarding the death of Ethereum’s creator: 21 year old Vitalik Buterin, circulated on Social media and this led to the gross wipe out.
Check out the full story below, by Quartz Media:

““Vitalik Buterin confirmed dead. Insiders unloading ETH” read the title of the post on 4Chan, the notorious online message board frequented by internet trolls. “Fatal car crash,” it went on. “Now we have our answer. He was the glue.”

“ETH” refers to ethereum, the world’s second most valuable cryptocurrency, which was invented by a 21-year-old, Vitalik Buterin, in 2015. The currency’s price has risen by 50 times this year so far, and many market watchers have wondered when the gains would stop. The price was already in the midst of a sudden decline yesterday that saw about $4 billion wiped off its total market value, and according to the post, Buterin’s untimely death explained it and heralded a crash.

It turns out that Buterin wasn’t dead, nor involved in a car crash. He took to Twitter to prove that all was well, but how to supply evidence that he was indeed behind the Twitter account? In the cryptocurrency equivalent of posing with the day’s newspaper, he scrawled out some data linked to the latest block (you can see that data for yourself here) mined on the ethereum blockchain on a piece of paper and took a selfie with it. Wikileaks founder Julian Assange did something similar to dispel rumors of his demise by reading out data from the bitcoin blockchain on a live stream in January. Buterin then posted the selfie on Twitter: 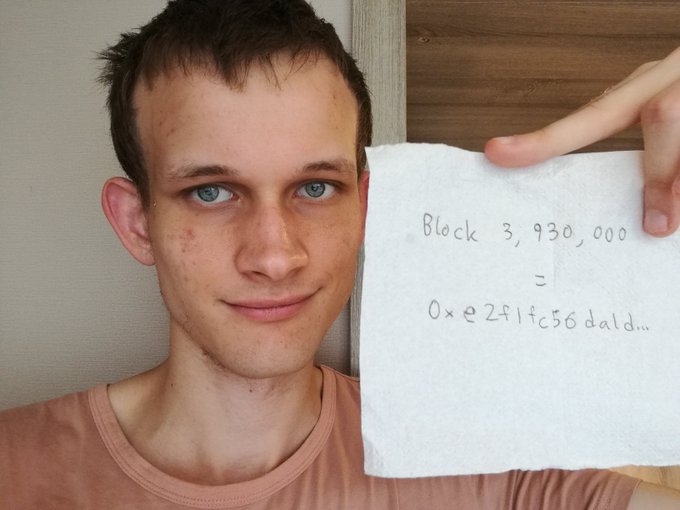 Ethereum’s slide seemed to hit a bottom after the hoax was posted on 4Chan, recovering about 10%. Despite yesterday’s steep sell-off, it’s still trading 39 times higher than it was at the start of the year.

This is what market manipulation looks like in the age of cryptocurrencies and fake news. The hoax did reveal something interesting about cryptocurrencies: Unlike bitcoin’s creator, Satoshi Nakamoto, an almost mythical figure whose identity remains unknown, Buterin is the de facto public face of ethereum. He doesn’t control the network—it’s a piece of decentralised software that anyone can run or build on, just like bitcoin—but his status as its creator means that rumors like this one have a higher chance of taking hold in the markets.

That means that $26 billion in market value partly depends on a 23-year-old staying healthy and alive—and providing selfies to prove it.”

If this was helpful, subscribe to my updates via the form below:

Emmanuel Osei aka Karisma, is a blogger, a/an network/online marketer, and a content creator. Emmanuel studied Public Administration at The University Of Ghana Business School. After four years working experience in the shipping industry, Emmanuel finally decided to throw his certificate under his bed, and pursue his entrepreneurial ambitions. He is also an online business coach. Contact: smartincomeoffice@gmail.com
Previous Meet The Man Who Bought Two Boxes Of Pizza For $29 Million!
Next Why I Resigned From My Good Paying Job To Become My Own Boss

This Guy Tried To Scam Me, This Will Make You laugh Out Loud

Unauthorized Copy Of This Post Is Highly ProhibitedHello, and welcome to Smart Income Office, I’m …

Powered by SmartIncome | Designed by RichCytech
© Copyright 2020, All Rights Reserved